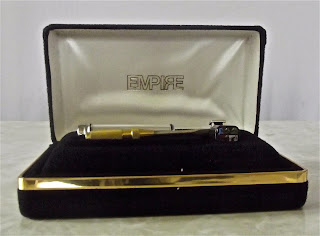 Browse enough internet audio forums and sooner or later you are bound to come across a discussion about the old Empire moving magnet cartridges that were manufactured by the Empire Scientific Corporation in New York a long, long time ago. Often someone has picked up a second hand turntable that came with am Empire and they seeking help to find  new stylus for it. The surprising about these discussions is that nobody has a bad word to say about them. Comments range from "they're good" to "they're exceptional." A quick check of Ebay reinforces these views with some models of old Empire carts minus their stylus fetching tidy sums.

Intrigued by this, I recently purchased an Empire 2000/S from a seller in Canada. It was new old stock (NOS) and came in its original packaging, including a lovely black velvet gift box. Out of its box, the Empire 2000/S is a rather ungainly and ugly beast. 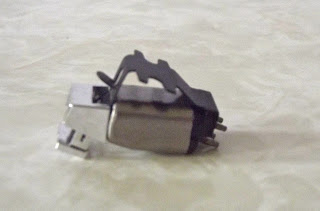 It  has a grey metal body and an odd black removable frame that allows it to be secured to the tonearm. Although, it has very little plastic in its consrtuction it looks  cheaply made.  Its specifications, however, are anything but cheap. The frequency response is 10-35,000Hz; it has a 0.2 x 0.7 elliptical nude diamond; and 30db channel separation. Still it did look like the mounting frame was inadvertently designed to capture resonance, vibrate like crazy and totally stuff up the tracking. The phrase "O ye of little faith" springs to mind. While it's not the easiest cartridge to mount - needs small screws and 3 hands - it is fairly straightforward to align once mounted.  As soon as the needle dropped into the groove, I knew this was something special.

The sound of music this thing reproduces is exceptional. There is a huge amount of detail, its incredibly well-balanced in the sense that there appears to be no over-emphasis of any of the frequencies. Bass, mid-range and top-end are all so smoothly working together. Sounds good? It is even better. Without a doubt this cartridge delivers one of the most 3D music sounds I have ever heard. Thanks to its channel separation, the stereo imaging and layering and positioning of vocals and musical instruments is simply superb.

A little bit of research revealed that there were a number of cartridges in the Empire 2000 series. Some further research revealed that there were in fact several different 2000 series produced by Empire. It was one of those companies that often used similar number series for different product lines several years apart. As well as the 2000/S, there was also a 2000X and a 2000Z.  And thanks to Mantra Audio in the UK I also managed to track down some information about a 2000 - 4000 series Empire produce.  In this series, 2000 designated the stereo cartridges and 4000 the quadraphonic cartridges. The specifications can be found here. The cartridges in this series all have gold-plated bodies. The 2000E/III was the top of the line of the stereo carts. It has a frequency response of 5-35,000Hz; channel separation of 35db and another nude 0.2 x 07 elliptical diamond stylus. 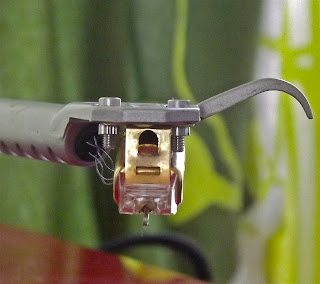 Pictured here, mounted on my Michell Tecnoarm, is a secondhand 2000E/III which I purchased on Ebay for $65. It shipped with a NOS Empire spherical stylus, not its original elliptical.  Yet still the sound was beautiful, revealing what great potential this cartridge had.  I have since replaced the spherical stylus with a reproduction of the original elliptical made by the famous Jico company in Japan. The level of detail revealed is quite staggering, once again the stereo imaging is exceptional.  While the 2000/S is one of the best cartridges I have heard, the 2000E/III with a greater channel separation and better bass response may just be the best I have heard. 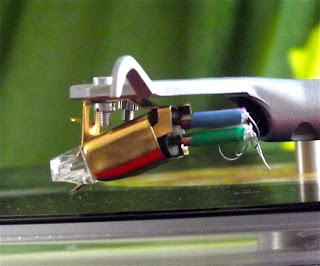 It is certainly superior to a $600 current production cartridge made by a very famous brand; and its also threatening to best some of my beloved Denon MC cartridges, including a very nice Soundsmith rebuild.

Both these cartridges are simply stunning. The E/III has a slight edge over the 2000/S, but this may change over time as the 2000/S burns in.


For the record, both cartridges were tested with a Graham Slee Genera, and the excellent performance I heard could well be because the Genera is a perfect match for these beautiful old cartridges,
Posted by Random Audio Dude at 2:00 PM