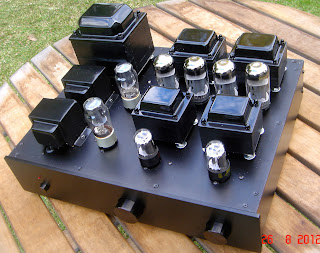 This is the lastest release from McChanson, a small one-man company run by valve guru Eric Chan in Sydney.  McChanson has long had a following among local musicians for his guitar and local stereophiles for his SET 300B and 6L6GC amplifiers.  His Push-Pull is a new creation,  inspired by Eric's desire to deliver a higher powered amplifier for those customers who just haven't got the speakers to work with SET.

Eric describes this as his Super marzEt, the "super" designating that it pumps more power than marzE or marzEt which are both SET.  Typically, the best you can get from SET is around 5 watts, but the McChanson Push-Pull does 25 watts per channel. It is a dual mono block configuration combined in  a single chassis and using a single power transformer to maintain value for money.  Interstage transformers are for the coupling stage.  It has an external bias setting and, as with all of the McChanson 6L6GC amplifiers, there are a whole range of power valves you can swap into it, KT88s, EL34s being the most obvious ones.  But I am pretty sure it would also take a valve as obscure as the 250B. 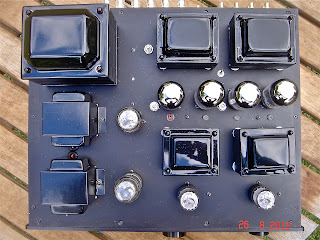 I haven't had the opportunity to hear this new addition of the McChanson line-up.  Like all of the McChanson amplifiers it is custom made when an order is placed and Eric works closely with the customer to ensure that he is delivering what they want.  The amplifier pictured was made for a customer in Tasmania.  When I contacted him for a comments on its performance he emailed me the following:


"The McChanson amp (the Black Knight) is just great, warm and sweet. The power of the meagre 25 watts is HUGE and I just can’t play it any louder than 1/3 volume which is too loud. It grips the music with so much gusto and clarity it just makes me grin from ear to ear, it’s scarily good..."

Eric can be contacted through his McChanson Ebay store.

Posted by Random Audio Dude at 9:45 AM