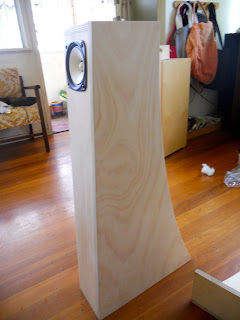 I've been a fan of full-range speakers for several years now, having completed the Madisound build for the Fostex 6.5" FF165k driver and another build for the Fostex 4.5" FE126e - both of which I thought sounded just wonderful, especially the purity of the mid-range. During this time, I have followed the amazing design work that has been going on over the Frugel Horn Project site. One of the aims of that project was to produce a well-designed, but simple flat-pack that could 1) be built by just about anybody with a couple of sets of clamps and clue, 2) didn't cost a fortune in wood, and 3) really let full-range drivers demonstrate why they are just so, so good.

Given the beautiful complexity of the designs the Frugel Horn Project have showcased over the years, I had some doubts they would ever get a such a solution. But they did, and the pictures with this post show my own build of the Frugel Horn Project's flat-pack. It's different to the other full-range cabinet builds I have done. Firstly, it's a rear firing horn rather than front firing, and secondly it was much easier to build.

But there is a third thing that makes this design different, and so special. It was developed by a bunch of highly skilled enthusiasts and like all enthusiasts they aren't necessarily in it for the money; they want others to get to hear just how good full-range speakers are. To that end, they have effectively made the design open source, with some small copyright acknowledgements required, and are encouraging people everywhere, who have the required equipment, to produce the cabinets locally for sale.

In Australia, this is being done by Ben Arends in Geelong, Victoria. Check out his Sound with Style website for further details. Ben is selling the cabinets for $299 inclusive of shipping in Australia, and he will CNC machine the panels to match just about any 4.5" full-range speaker available. 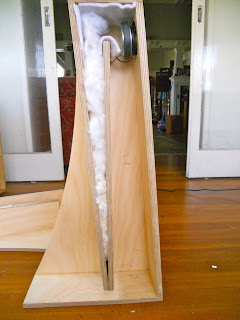 I completed my build with Fostex 4.5" FE126EN drivers, which replace the older 126E models, Neotech Teflon coated 20AWG 7N solid core UPOCC copper wiring, and Eichmann cable pods. I tried to source as much as I could from Australian suppliers to finish the build. In the case of the Neotech wire, yes, it's made in Taiwain, but I sourced that from myself as I sell it in Australia. The Eichmann cables pods are from ETI Technologies, designed and made in Brisbane (and they are brilliant).

Sadly, it didn't work out with sourcing the FE126EN drivers in Australia. I was quoted a price close to $170, including shipping for a pair, which I was willing to pay, but a waiting time of nearly six weeks, which I thought was pretty ordinary. Instead I bought them from Madisound for $148 including shipping and received them within a week. Ah, Australian retail when will you guys get your act together?

And what do they sound like? Sadly, I'll need to leave that for another post, but suffice to say for the prices involved in making these speakers, nobody could be disappointed, and most people should be damned excited, because that is exactly the sound they deliver. Exciting, and also as clear and as transparent anything.
Posted by Random Audio Dude at 6:30 PM