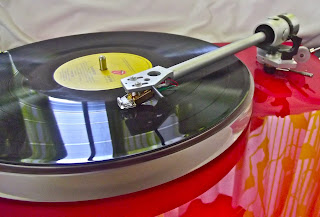 The photo shows my red Rega with its brand new Audio Origami PU7 tonearm.  The slab of vinyl it's spinning is Peter Tosh's "Bush Doctor" which is very relevant to how the PU7 performs but I'll come back to that later.

Up to now my tonearm which did duty on my main deck was a Michell Tecnoarm.  The Tecnoarm and I got on really well for what is close to 6 years.  It played well with every cartridge I threw at it. It was lively, dynamic and and brought all my old vinyl to life.  It was better than any other Rega arm or Rega-based arm I'd ever heard and made me realise just what an original gem the Rega RB250 arm was warts and all (the Tecnoarm being a fully modded RB250).

The PU7 had been on the radar for quite a while.  It seemed that it was universally appraised as a brilliant piece of engineering that had taken the legendary Syrinx tonearms beyond even their ultimate conclusion. But I had thought that replacing the Tecnoarm would amount to little more than a refined tweak that would give me a ounce more of sophistication.

I was firmly convinced that the PU7 would be a one-way ticket to the land of diminishing returns - a place that I had always wished to avoid.  I was wrong.  The PU7 wasn't a tweak.  It was the most brilliant upgrade I've ever made to my system.  Trying to find the words to describe what the PU7 does is very difficult. It really needs to be listened to.  In a nutshell there is more music, more detail and what struck me as most remarkable of all - more sound staging. I though the clarity and the detail of the Tecnoarm was exceptional.  Compared to the PU7, the Tecnoarm sounds muddy around the edges; overly warm, and has a more closed-in sound stage.

The PU7 just seems to get everything right, but the thing that hits you about it, really hits you right from the start, is the bass end.  It is there in abundance (even on my full range speakers which are a little bass poor) and it is solid and clear, and has real life and energy to it.  Which brings me back to Peter Tosh's "Bush Doctor".   The bass on a reggae record is notoriously hard to accurately reproduce. Most vinyl playback systems tend to over-emphasise the bass rhythm in reggae, often turning it into a fat low end blancmange, while CD playback just seems to suck the life out of it. With the PU7 reggae has never sounded as good; the bass sounds alive, it sits in its proper place, driving the music forward but not dominating the rest of the sound.

But that's just one example of how good the PU7 is.  It doesn't matter what LP you pull out of your collection - it will sound so much better than you have ever heard it before.

For the Rega owners out there who have been thinking of upgrading to a better turntable, my recommendation would be to upgrade to a PU7 first.  Audio Origami can make the the PU7 as a direct replacement for a Rega arm.   One other thing that springs to mind is that if you ever thought about upgrading a standard Rega arm to a Michell Tecnoarm then it is certainly worth it, but a better option would be to save some extra money and go for the PU7.

I dealt with Mendo, the Audio Origami Australian representative.  Here's the link to the website. Both he and Johhnie in Scotland were a please to deal with. Johhnie's the genius who designs and builds the PU7.