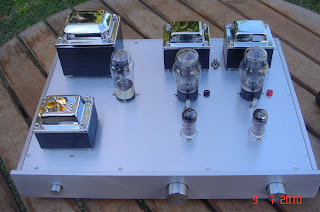 It's highly likely that there are only a few people who have heard one of these rather exquisite 8 watt per channel SET valve amps. McChanson is hardly a household name when it comes to stereo systems, yet the maker of these amps, Eric Chan, has been involved with valve amplifiers since the 1960s. He's currently a one man cottage industry, building stereo and guitar amplifiers from his residence in the leafy suburb of Burwood (Sydney, Australia).

I came across Eric largely by chance. Over the last 3 or so years, I have grown interested in what the Chinese have being doing with bringing cheaper valve stereo amps to the international market. Irrespective of the debates about the quality of some Chinese gear, the Chinese have allowed many of us, myself included, to hear what that really expensive valve sound was all about, without having to buy in at the higher end. So in idle moments I regular check valve amps on Ebay just to see what the latest "remarkable" offer might be. Three months ago, the McChanson amp pops up within my Ebay scope and I notice that the seller was in Australia and that what he was offering was truly remarkable indeed.

The offer simply was this: A custom built single ended triode Class A amplifier for between $600 and $750 Australian, depending on which components you chose. Basically, Eric was offering me an opportunity to place an order with him on Ebay, and then work with me (when I won the bid) to build the amp. As I said a remarkable offer, an offer that I thought was too good to be true. So I Googled "McChanson amplifiers" and ended up going through a long list of dud results to find some wonderful snippets about Eric's guitar amplifiers on obscure (to me) guitarist forums. Comments were universally full of praise for the tone Eric's amps could produce, and I realised that a McChanson guitar amp had a bit of a cult following, not just with guitarists in Australia, but also in the UK and the US. Could not find one single thing about one of his stereo amps, but this was looking like it had potential.

So I contacted Eric and we had a very interesting email conversation about what he does and how he works, and I was totally knocked out by his knowledge and how humble he was about having such knowledge. I asked Eric at one point that if I didn't like the amp he built for me would he be unhappy if I resold it? His response was that if I did not like it he would be happy for me to re-sell it, but he was 100% confident that I would like it. He was 100% correct.

Work commenced on my amp in late June and Eric kept in contact with me by email nearly every day. He would send me pictures when he had cut the top plates, when he had commenced the point to point wiring, and ask questions about which of the components he might use that I would prefer. This was during the football world cup, and Eric is a big soccer fan, and he would email me occasionally saying "no work on your amp today, I stayed up all night watching the football" and we ended up discussing the world cup results for several emails.

I ended up paying just over $700 for the McChanson MarzE amp Eric built for me. Better tranformers and the ability to switch between pentode and triode mode. Triode is sweeter; Pentode gives you a bit more kick in power. I made the decision upfront to go with the 6L6 power valves in the amp, and hence have them as strapped pentodes for the SET stage. Eric offers to build this amp in pure triode mode for 300B valves.

I shied away from the 300B configuration; just search the internet and see how much each 300B valve costs. Out of my league right now.

When Eric says he is building the amp in 6L6 mode, he means the whole family of valves that work that way. For example, KT 66s can be used, and EL 34s, easily done with a bias adjustment with a multimeter. This is very much an interactive piece of gear. And you will change the valves to suit what you like. You can't do that with solid state.

Okay, I guess the big question is what does it sound like? Unbelievably transparent; rich and full and incredibly detailed. It gives a big three dimensional sound on vinyl that makes it hard to listen to CD on a good solid state amplifier. So it seems that everybody says that valve amps have warmth; I suppose it does, maybe, but the biggest thing for me is its pure tonal clarity. Vocals and instruments just sound so real on the McChanson.

For the price, this is a simply a killer of an amplifier. And the service you get from Eric, well, what can I say, other than he is an exceptional and honest person, who treats his customers with the utmost respect, and endeavours to find out what they like in order to deliver an amp that suits their tastes.

And what is even better for me is that most nights I get to play it as loud as I want. I am the only guy in a family of five, and yep female ears are more sensitive, particularly to any distortion. There is no distortion on a McChanson amp. None at all.