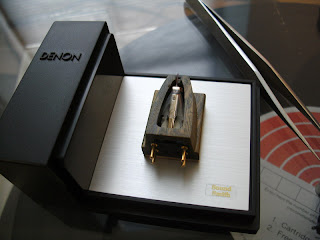 Every now and then you come across a piece of stereo equipment whose performance goes way beyond your expectations. Up until 3 weeks ago I had been using a Denon DL304 in my system and raving about its clarity and musical detail. I was pleased to see that my own experience of this cartridge was matched by just about every reviewer around.

I had bought the DL304 as a step up from my stock standard classic DL103. You either love the DL103 or you wonder what all the fuss is about. I'm in the former camp. The DL103 just makes beautiful music and seems to have a real talent for eliminating record surface noise. The DL103 I had was a secondhand one I picked up from one of those online Japanese stores that specialises in selling used gear into the western market. I knew nothing about its history, so wasn't all that surprised one day when it touched down on a piece of vinyl and the cantilever broke off.

In seeking to replace it, this time with a brand new version, I came across a total bargain price for the DL304 and have been happy ever since. Here was the same Denon sound but with far greater transparency and more musical detail. At the price I paid it was more than worth the additional cost above buying a new DL103. The only problem I had was the fact that the DL103 was now useless only because the cantilever had snapped off and I couldn't bear to just throw it away. Sure I had heard about rebuild and retipping services that were available, but I was led to believe that they produced mixed results. Then I came across the particular service that The Soundsmith was offering, thought about it for a while and decided that the idea of ruby cantilever with a nude contact line diamond being added to the dead DL103 was a great way of getting a new DL103 for around about the same price. Obviously, there also seemed like some good potential here for getting an improved sound out of the 103.

Then the evil voice of the audio devil popped into my left ear and said "why not get the rebuild done in a wooden body?" I managed to resist this for quite a while. I had already placed my order with Soundsmith for the ruby cantilever option and the DL103 was winging its way to the US. It was only when Soundsmith emailed to confirm they had received the cartridge, and it was in the standard 13 week wait for a rebuild, that the audio devil popped up again and began a full-frontal assault on convincing me that I would never be happy until the DL103 had been fully reincarnated. After several days I realised that resistance was futile and emailed Soundsmith asking about the wooden body. This option more than double the cost of the rebuild and, coincidentally, took the price of the rebuild to what I had paid for the DL304.

It was audio madness, but I gave into temptation and paid the extra money for the wooden body, then went back to enjoying the 304. Then the fully reincarnated DL103 finally returns in the mail. It looks good but kind of weird too. The wooden body is kind of greenish, it has a brass top plate and you can clearly see that the cantilever is ruby red. Apart from having a certain chunkiness about it, it does not look anything like a Denon cartridge.

I was expecting the sound to be good. I was expecting that it would sound nothing like the DL103 any longer and nothing like any of the other Denon cartridges I had ever heard. I was not expecting the sound to be gob-smacking astonishing. As soon as it touched down on a piece of vinyl for the first time, I knew I was in goose-bump territory. It was the Denon sound taken to a whole new height. The richness and timbre that I love in the Denons had suddenly and dramatically burst into a full and glorious bloom. The clarity, transparency and detail reached beyond not just what the DL103 could do, but the 304 as well, and the soundstaging was simply magical.

I am tempted to say that, with hindsight, I didn't really need to spend the money on the DL304. It's an exceptionally good cartridge and worth every cent I paid for it, but the reincarnated DL103 is simply astounding. It is the cheapest way that I've come across to buy a cartridge that is clearly hitting at the big end of town.
Posted by Random Audio Dude at 2:52 PM